A Fusion of Traditional and Contemporary Art at Ganondagan Festival 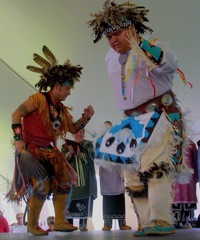 Award-winning Artists Showcase Native Heritage and Culture Victor, NY - On July 25 and 26, 2009, Ganondagan State Historic Site will present its 18th Annual Native American Dance & Music Festival and Art Market. As part of each year's Festival, dozens of the most gifted traditional and contemporary Native Artists from across the U.S. and Canada will exhibit at the show.  Among the artists participating this year, Ganondagan will welcome renowned artists Tammy Beauvais, Peter B. Jones and Tammy Tarbell-Boehning. Tammy Beauvais (Mohawk) of Tammy Beauvais Design, located in Kahnawake, Quebec, is a fourth generation artisan who began creating clothing influenced by her Iroquois heritage at the age of 13.  Ms. Beauvais designs both traditional native garb as well as contemporary clothing for men and women, incorporating the rich symbolism of the Iroquois people into all of her pieces.  She was commissioned by Aline Chrétien, wife of Canada's 20th Prime Minister, to design 34 cashmere shawls, given to the wives of 34 heads of state attending the 2001 Summit of the Americas in Québec City. Her work is on exhibit at the Heard Museum in Phoenix, Arizona, the Pequot Aboriginal Museum in Mashantucket, Connecticut and at the McCord Museum of Canadian History in Montreal, Canada.  Peter B. Jones (Onondaga-Seneca, Beaver Clan) is a celebrated potter and sculptor who studied under Hopi artist Otellie Loloma while attending the Institute of American Indian Art in New Mexico.  In creating his beautiful pottery, Jones uses the traditional Iroquois method of pit firing, hand-built coiling and slab construction.  He is also known for incorporating what he calls "Indian humor" into some of his pieces.  His works have won numerous awards, and are on exhibit at the Institute of American Indian Art in Santa Fe, New Mexico, the Heard Museum in Phoenix, Arizona and in the Museum of Anthropology in Frankfurt, Germany..  Mr.Jones resides on the Cattaraugus Territory of the Seneca Nation of Indians. During her fine arts studies as Syracuse University, Tammy Tarbell-Boehning (Mohawk, Turtle Clan) was introduced to the works of Maria Martinez, one the most famous potters of the San Ildefanso Pueblo in New Mexico.  Today, she incorporates old and new techniques and materials into her pottery, creating a fusion of contemporary and traditional design.  Ms. Tarbell is also recognized for her pottery doll series that depicts the journey of the Native American woman.  The poignant faces of her pottery figures reflect individual personalities full of strength, wisdom and courage. FUSION, Ganondagan's 2009 Native American Dance & Music Festival and Art Market will take place at Ganondagan State Historic Site located at 1488 State Rte. 444, Victor, NY on July 25 and 26 from 10 a.m. to 6 p.m.  Admittance to the festival is $8 for adults, $5 for Seniors and Students, $2 for Children (age 4-12), and Free for children under 4 and for Friends of Ganondagan Members showing current membership card.  For full program, visit www.ganondagan.org or call 585.742-1690.

Ganondagan State Historic Site is the former location of the largest Seneca Village in New York State until 1687.  It is the only the only U.S. national landmark east of the Mississippi River and the sole New York State Historic Site dedicated to Native American History and Culture.  It was also designated as a national treasure during the "Save America's Treasures" presidential tour. Today, visitors can tour an authentic replica of a 17th Century bark longhouse and hunting lodge, take self-guided tours over 500 acres that were once part of this Town of Peace belonging to the Senecas.  The Senecas were "the Keepers of the Western Door" and part of the Iroquois Confederacy or Haudenosaunee, as they referred to themselves.