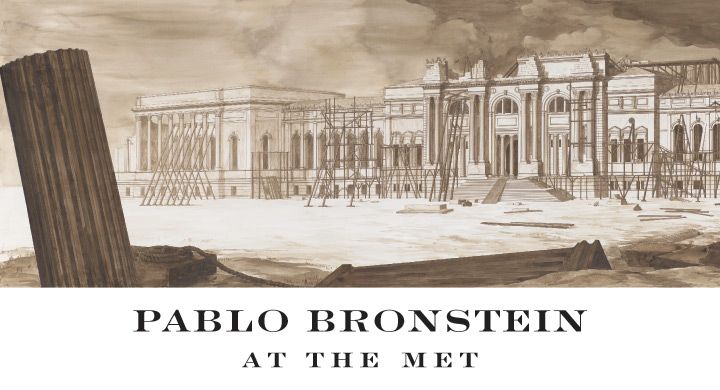 Exhibition Dates: October 6, 2009–February 21, 2010 Press Preview: Monday, October 5, 10 a.m.–noon Exhibition Location: Lila Acheson Wallace Wing, The Gioconda and Joseph King Gallery New York, NY – Pablo Bronstein at the Met is a presentation of new work by the London-based artist, addressing the history and future of The Metropolitan Museum of Art, and will be shown at the Museum from October 6, 2009, through February 21, 2010. Several large ink drawings by the artist will suggest a mythical history of the Metropolitan Museum, imagining the building under construction. A series of smaller drawings will focus on hypothetical futures of the Museum. This will be the artist's first solo exhibition in New York. Through drawings, installations, performances, and books, Pablo Bronstein has investigated a variety of historical periods and tastes. His palette encompasses a myriad of styles: from the mannered baroque of Turin to the classical architecture of 18th-century France, from early 20th-century Modernism to Postmodernism in its various manifestations. Adopting the guise of the architect, architectural historian, and the user of buildings, Bronstein reveals what might be described as the veneer of architecture. In doing so he highlights the complicit power structures that are required to accomplish great works, in turn inviting viewers to consider the mechanisms that delineate private and public space. Pablo Bronstein was born in Argentina in 1977 and now lives and works in London. His work has been included in the Tate Triennale, 2006, London, and Performa 07, New York, as well as in exhibitions at Tate Liverpool, Mary Boone Gallery, New York, and the Whitechapel Project Space, London. Solo projects include the exhibition at Lenbachhaus, Munich, 2007; Paternoster Square, Herald St, London, 2008, and Intermezzo at Tate Modern, London, 2009. Upcoming projects include Characters, Figures and Signs, Tate Modern, 2009; Manifesta 8 in Murcia, Spain, in 2010; and the Sculpture Court Commission, Tate Britain, in 2010. Bronstein has an M.A. in Visual Arts from Goldsmiths, University of London, and a B.A. from the Slade School of Fine Art, University College, London. He is represented by Herald St, London, and Galleria Franco Noero, Turin. Pablo Bronstein at the Met is organized by Gary Tinterow, Engelhard Chairman of the Department of Nineteenth-Century, Modern, and Contemporary Art. It is the sixth in the Metropolitan's series of solo exhibitions of young artists, which has featured Tony Oursler (2005), Kara Walker (2006), Neo Rauch (2007), Tara Donovan (2008), and Raqib Shaw (2008–2009). In conjunction with the exhibition, the Museum will offer An Evening with Pablo Bronstein on Friday, October 2, at 6:30 p.m. A talk by the artist about his work will be followed by a private cocktail hour for the guests and an opportunity to meet the artist. The program is presented by Spectrum, a newly formed group at the Metropolitan Museum providing engaging programming and fresh perspectives on the Museum's collections and exhibitions. An Evening with Pablo Bronstein is the first of Spectrum's social events, which are designed to appeal to audiences ages 21 to 39. Tickets are $20 and include Museum admission. For inquiries and tickets email: spectrum@metmuseum.org. This event is for guests 21 and older. Beer is generously donated by Harpoon Brewery. The exhibition will also be featured on the Museum's website, www.metmuseum.org. ###