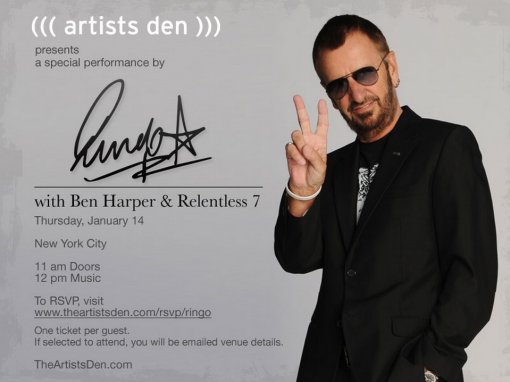 July 'Artists Den' National Television Broadcast Features Ringo Starr at the Met New York, N.Y. - On July 7, Ringo Starr's 70th birthday, The Metropolitan Museum of Art will inaugurate a special display of his gold-plated snare drum that will remain on view to the public through December 2010 in the Museum's second-floor Musical Instruments Galleries.  On loan from Ringo Starr, it was originally presented to him by the Ludwig Drum Company during The Beatles' 1964 visit to Chicago when the legendary rock group, in which Mr. Starr was the drummer, was on its first tour of the United States. "This special presentation drum-made for the most influential drummer of a generation and representing the highest-end production of the most important drum manufacturer of the 20th century-holds iconic stature," stated Jayson Kerr Dobney, Associate Curator in the Metropolitan Museum's Department of Musical Instruments. "We are so pleased to be able to display in our galleries this spectacular loan from Ringo himself, who has owned it since it was first presented to him in September 1964, for thousands of visitors to see during this landmark birthday year." Following the appearance of The Beatles on The Ed Sullivan Show in early 1964, on which Ringo Starr appeared playing a Ludwig oyster black pearl drum set with the name "Ludwig" prominently displayed, the manufacturer experienced an enormous surge in sales and had to schedule round-the-clock production to accommodate orders.  That September, The Beatles performed their first concert in Chicago, home to the Ludwig Drum Company.  To thank Ringo for using their instruments, company president William F. Ludwig, Jr., presented him with the specially made, one-of-a-kind gold snare drum ("Super-Sensitive" model) before the concert.  It bears a plaque reading: "Ringo Starr, The Beatles." At the presentation, Mr. Ludwig said, "I have never known a drummer more widely acclaimed and publicized than you, Ringo Starr.  Your millions of fans have honored you and the other members of The Beatles by their overwhelming acceptance of your recordings and concert appearances.  On behalf of the employees and management of the Ludwig Drum Company, I would like to thank you for choosing our instruments and for the major role you are playing in the music world today." The snare drum, which measures 14 inches in diameter and 5-1/2 inches high, will be on view in a special display within the Metropolitan Museum's newly renovated Musical Instruments Galleries, which house its renowned collection of instruments from six continents and the Pacific Islands, dating from about 300 B.C. to the present.  Unsurpassed in its comprehensive scope, the collection illustrates the development of musical instruments from all cultures and eras. Also in celebration of Ringo Starr's 70th birthday in July, public television stations throughout the United States will broadcast Live from the Artists Den: Ringo Starr with Ben Harper and Relentless7.  This one-hour second-season premiere of the popular contemporary music series features Mr. Starr, folk-funk star Ben Harper and Relentless7, and singer Joan Osborne in an intimate concert on the stage of the Metropolitan Museum's Grace Rainey Rogers Auditorium.  Ringo Starr and Ben Harper are also interviewed in the Museum's Musical Instruments Galleries. The initial New York-area broadcast of Live from the Artists Den will take place Friday, July 9, at 9:30 p.m. on WNET/Channel 13, and Saturday, July 10, at 10 p.m. on WLIW/Channel 21; check local listings and www.TheArtistsDen.com for dates and times in other areas.