For those who seek it, New York State has a darker side to show off to fans of the offbeat, eerie, or macabre. Discover ghosts, haunted hotels, and creepy graveyards when you check out these spooky spots.

Discover the paranormal on the Haunted History Trail

The best collection of all things paranormal is the Haunted History Trail, with opportunities to discover four hundred years of history and maybe make some disembodied friends along the way. Their website is chock full of spooky locations, spirit hunts, guided tours, haunted inns, ghostly events, and even other-worldly dining all across New York State for the paranormal-curious, even some locations that cater to spectral investigation teams.

Stay in a haunted hotel

The Sagamore Resort on Lake George (pictured) has been recognized as one of the Best Haunted Hotels in the US. Visitors have been said to come across a ghostly couple in the restaurant, a woman in a pinkish-brown dress on the porch, a young child on the golf course who pranks golfers, and a ghost in the elevator, among other spirits. Spooky stories have also been reported at Fainting Goat Island Inn in Nichols and Belhurst Castle in Geneva.

Try to make a date with a real ghost at Rolling Hills Asylum in the Greater Niagara town of East Bethany. This is not a theatrical attraction—it is an actual historical asylum and one of the most haunted locations in the world, featured on shows like Travel Channel's Ghost Adventures. There are tours ranging from two-hour historical flashlight walking tours to the three-hour Psych Hold and eight-hour Captive stay, plus private Ghost Haunts. Too much for you? Maybe get a sample of the insanity by attending one of their movie nights—check their Facebook page showings this season.

Medical museums to make you shiver

From bloodletting to electric shock therapy, what was once cutting-edge medicine can years later seem outlandish. The Dr. Best House & Medical Museum in Middleburgh is a step back into a 1920s historic Victorian home and medical office. The site features a myriad of preserved items, including antique medical equipment like Dr. Best's bottles of potions that range from Hemlock Oil to Digitalis to Calamine Powder. Special paranormal programs are held at various times of the year as well. In addition, the Saranac Laboratory Museum tells the fascinating story of Saranac Lake's role in the treatment of tuberculosis. 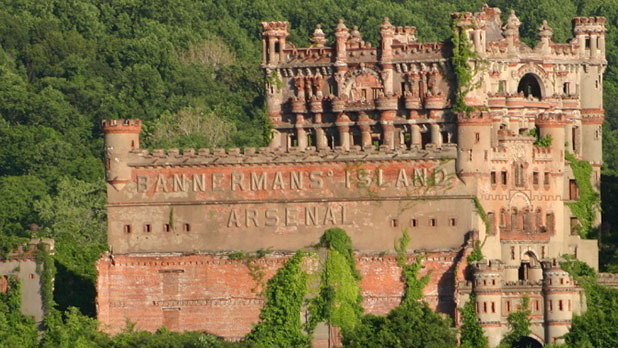 On an island just off the shores of the Hudson River are the mysterious, ornate, still-standing remains of Bannerman Castle. It was once an ammunition storage facility modeled on a Scottish castle. Now the Bannerman Castle Trust hosts musical and theatrical performances, history tours, storytelling, and even meals.

Graveyards are inherently creepy for some, but they can also be educational and even serene. A number of cemeteries across the state offer tours that run the gambit from the historic to the chilling.

During the day, the Sleepy Hollow Cemetery (pictured) offers a tour focusing on Washington Irving and the Legend of Sleepy Hollow as well as one focusing on all the important people buried there. After dark, there are tours by lantern-light like "Murder & Mayhem" and "The Good, the Bad and the Unusual."

The Grand Torchlight Tours of Mount Hope Cemetery include intriguing stories from Rochester's history, as do twilight and daytime themed tours that focus on the luminaries who are interred there, like Frederick Douglass and Susan B. Anthony.

Annual lantern-lit tours of Woodlawn Cemetery in the Finger Lakes include "appearances" by notable tenants of the cemetery, like famous writer Mark Twain. This event sells out so grab your tickets in advance.

The 269-acre Forest Lawn Cemetery in Buffalo hosts concerts and lectures in its chapel, and a full slate of guided trolley and walking tours, with unique offerings like Civil War history and Frank Lloyd Wright architecture.

In Jamestown, the final resting place of Lucille Ball and home of the Lucy-Desi Museum and the new-in-2018 National Comedy Center, the Fenton History Center (pictured) offers tours of Lakeview Cemetery, like the "Saints and Sinners" and "Mausoleum and More," with horse-drawn carriages and actors in costume.

Famous New York City cemeteries with tours include: Green-Wood Cemetery in Brooklyn, home of Leonard Bernstein, Boss Tweed, and Jean-Michael Basquiat, with a historic trolley tour, and the "Into the Veil" evening of exploratory theater; and Woodlawn Cemetery in the Bronx (pictured), with residents like Miles Davis, Robert Moses, and Joseph Pulitzer, and tours like "Beer Barons" and "Illuminated Mausoleums."

Ross D. Levi is the Executive Director & VP, NYS Division of Tourism / Empire State Development. He also did marketing in the film industry for studios including Universal, Miramax and 20th Century Fox, and is a published author and lecturer on cinema.